Tom Brosseau is a singer with an acoustic guitar, and as Morrisey said in that Smiths song, "I thought that it meant you were a protest singer." But while Tom is not overtly political, he definitely is part of a continuum of folk artists tapping into a simple tradition of quieter expression that doesn't get loud or smash instruments onstage.

Tom comes from a family of folk storytellers, growing up in North Dakota before moving to California. Narrative was the focus – simple old blues structures told variations on ancient stories, murder ballads, and the most time-tested grist of all genres of song craft: tales of woe in love. Songs that take raw feelings of broken hearts and attempt to cobble something meaningful from the scattered pieces. 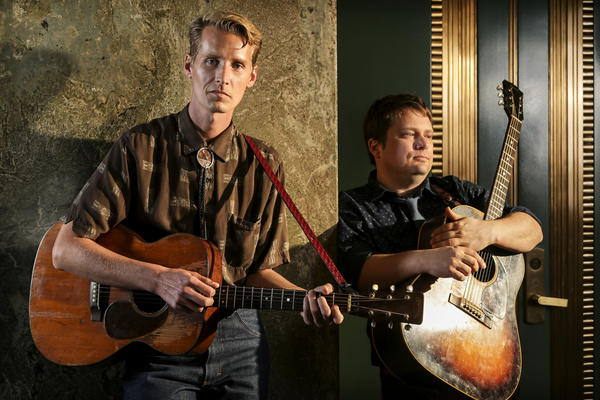 By now you probably know what Tom Brosseau sounds like, except for one interesting aspect perhaps best illustrated in a story often retold when you read a review of him. Here's how NPR re-told the tale in 2006: "Record producer Gregory Page was sitting in the back office of an Ocean Beach coffee shop called Java Joe's on an open-mic night when he heard what he thought was a female singer with a beautiful voice. He went into the shop and discovered that the voice belonged to a man: a folk singer and songwriter named Tom Brosseau. Page persuaded Brosseau to do some recording."

And that's really it in a nutshell – Tom has a hauntingly beautiful voice that turns heads. And he's got the rich stories and plainspoken directness that reminds more than a few reviewers of Hank Williams (Sr …. sorry post-metalheads) to drape precariously over a sparse skeleton of solo acoustic guitar. He's been recording and performing since 2001, but only got noticed by labels and was heard by a larger audience in the last few years. Perhaps most famously, he collaborated with actor John C. Reilly and Becky Stark (of Living Sisters and Lavender Diamond)  a few years back.

After more than 5 years since his last solo album, he's just released "Grass Punks," featuring accompaniment by producer Sean Watkins (perhaps most famously a founder of Nickel Creek). Wit, honesty, and a wry sense of humor permeate an album caught between two opposing worlds – the North Dakota of his youth and the plastic irony of Los Angeles and Orange County, CA – where he's lived most of his adult life. The result works well.

Listen to Tom Brosseau as his style of musical storytelling was meant to be heard: live in person. He's playing Mississippi Studios (touring with Shelby Earl) in Portland this coming Tuesday February 25th. For tickets and more info, click here.